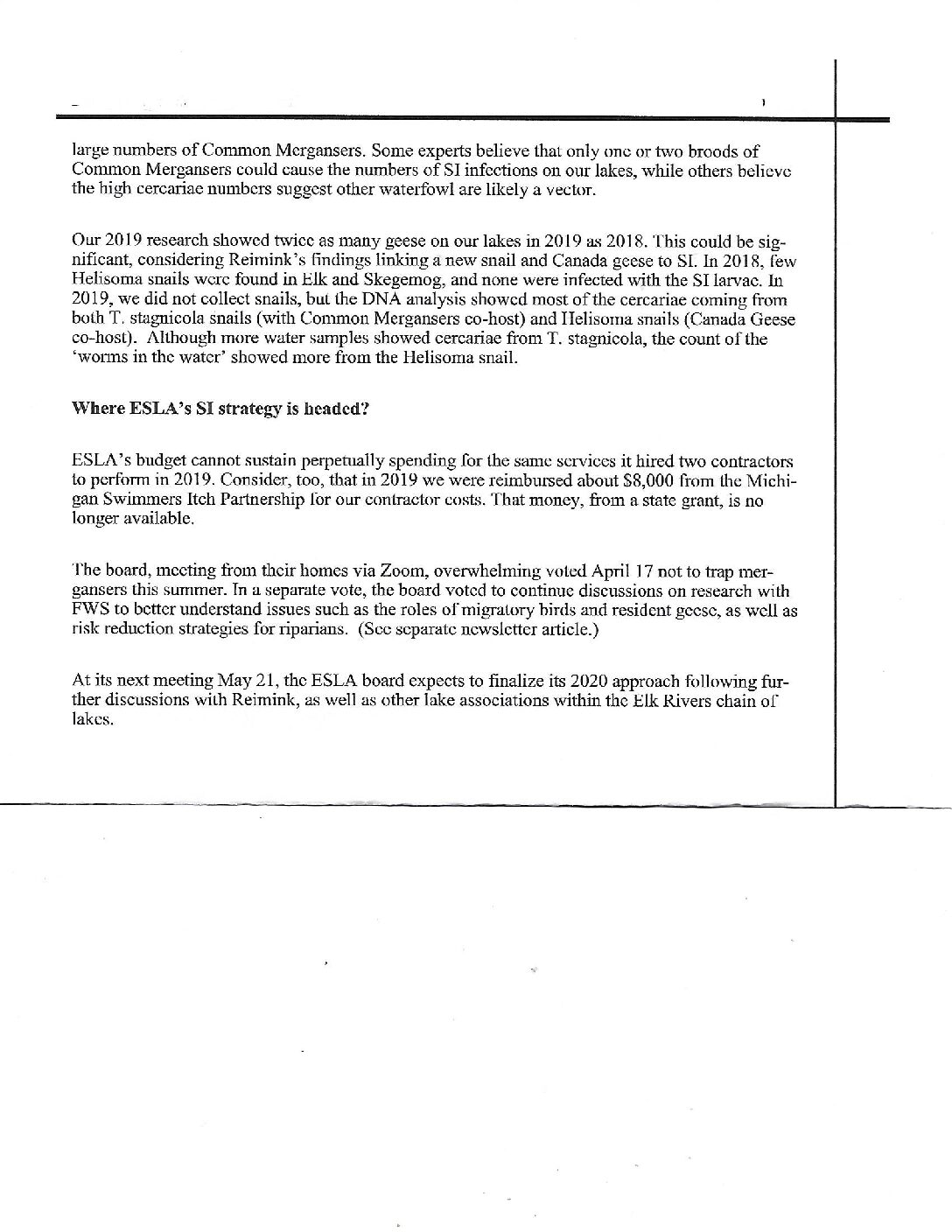 Swimmer’s Itch is a skin irritation that is caused by a larval form of certain flatworms from the Schistosomidae family. It is a fairly common occurrence on many of the lakes in our area. Schistosome flatworms are parasites with a complex life cycle (usually involving certain species of snails and waterfowl). Even though the Schistosome species found in Northern Michigan are not parasites of humans, their larvae do burrow into human skin seeking to complete their life cycle. The larvae are only 1/32 of an inch long and generally invisible to the naked eye. Since humans are not the proper host, the larvae soon die. The itching sensation is caused by an allergic reaction many people develop to the dead larvae under the skin. Many species of parasitic flatworms are naturally occurring in almost all lakes. However, not all larval species cause Swimmer’s Itch. The life cycle and host requirements of those species responsible for Swimmer’s Itch differ widely, and the ecology of most is poorly understood. Swimmer’s Itch has probably been around as long as human beings. It is known to occur in at least 30 states as well as Canada, Europe, Africa, and Asia. In the United States, the problem appears to be concentrated in the Midwest region.

What are the symptoms?

Not all people are sensitive to Swimmer’s Itch. Some who are exposed to the larvae never develop the itch. Those who are sensitive may feel a dull prickly sensation as the larvae burrow into the skin. This may occur either while swimming or immediately after leaving the water. At each point of entry, a small red spot may appear and begin to itch. Symptoms include intermittent periods of itching that will continue for several days. Many suffering from cercarial dermatitis (Swimmer’s Itch) experience the most severe itching early in the morning. After approximately 24 hours, the reddened areas reach their largest size. The itchy, reddened, and raised areas are often confused with bites from chiggers or mosquitoes and the symptoms may be misdiagnosed as those resulting from poison ivy or stinging nettles. Chigger bites are usually located at points where clothing contacts the skin such as wrists, waist, ankles, etc. Itching is limited to points of cercarial entry and will not spread and will never develop into water blisters. Swimmer’s itch, although extremely annoying and uncomfortable, is not a communicable or fatal condition. Over-the-counter drugs are available to reduce the symptoms of swimmer’s itch. Antihistamines can be used to help relieve the itching while topical steroid creams may help to reduce the swelling. Before taking any of these drugs, however, consult your physician or dermatologist for advice.

There are several means by which you can significantly reduce your chances of contracting the Swimmer’s Itch parasite. Maintain a healthy greenbelt along your shoreline property with a variety of native plants (including trees, shrubs, and herbaceous plants) to prevent waterfowl from congregating on your property. Shading of near-shore areas as a result of a shoreline greenbelt will also help reduce the amount of bottom-dwelling algae growth, which is a primary food source for the types of snails that are common hosts in the schistosome cycle. Since itch-causing larvae usually live in the shallows near shore, it is best to avoid this area as much as possible. This is especially important when the wind is blowing toward the shore. Towel off thoroughly as soon as you leave the water, and at frequent intervals. The fragile Cercaria of some species can sometimes be rubbed off before they fully penetrate the skin. Do not feed waterfowl! Feeding waterfowl may aggravate the problem by concentrating potential hosts in a limited area.