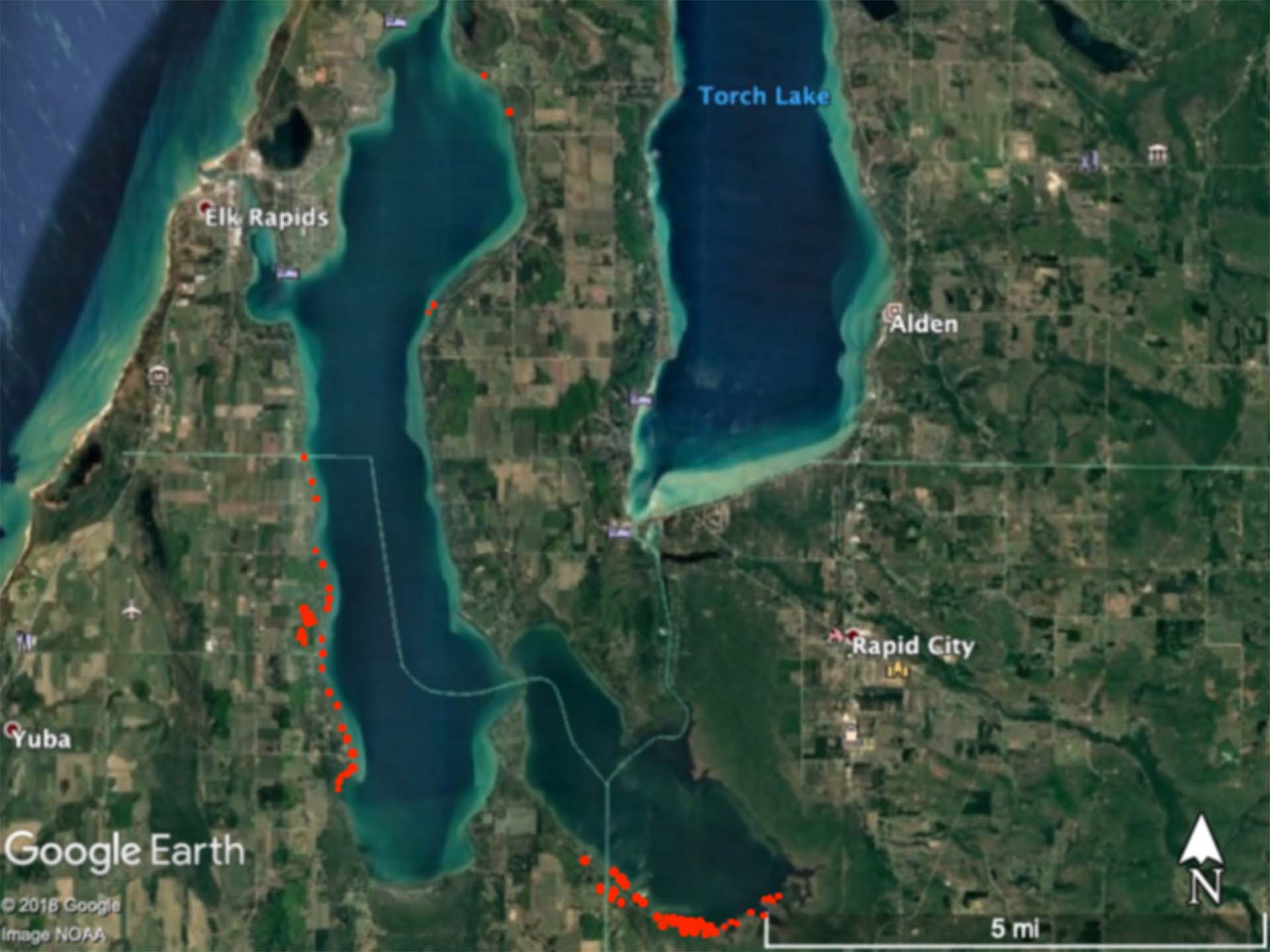 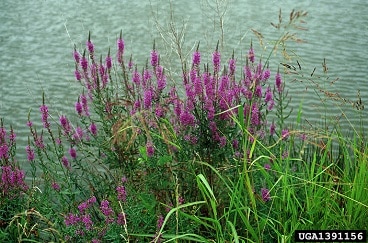 Purple loosestrife is an invasive wetland plant that is beautiful, but dangerous. Imported in the 1800s for ornamental and medicinal uses, purple loosestrife poses a serious threat to wetlands because of its prolific reproduction. The plant has been reported in every state except for Florida. Unfortunately, it is still sold as an ornamental plant in many states. Purple loosestrife has gained a strong foothold in many North American wetlands, rivers and lakes, including many in Northern Michigan.

Native to Europe and Asia, purple loosestrife can be identified by its purple flowers which bloom from June to September. Purple loosestrife produces square woody stalks 4 to 7 feet high. Leaves are heart or lance shaped and flowers have 5 to 7 petals.

Due to the long flowering season, purple loosestrife plants have the ability to produce millions of seeds each year. In addition to seeds, purple loosestrife can also replicate by sending up shoots from the root systems. The underground stems can grow up to a foot each growing season.

Purple loosestrife on Elk / Skegemog was first treated in 2018 by PLM Lake and Management Corp.    The ESLA project was started in 2017 with identifying plants on the lake, creating a spreadsheet with locations and obtaining consent from the owners to chemically treat the plants.   The process spilled over into 2018, where ESLA continued to get consent from owners, notified the public about the treatment via newspaper, then treated the plants.

In 2019, ESLA wanted to determine the efficacy of the 2018 treatment and how much Purple Loosestrife on the lake.  ESLA’s summer intern surveyed the lake via kayak, noting GPS coordinates where purple loosestrife was found.   It was difficult to determine exact locations where plants were treated in 2018, but it appears the treatment is effective.    But purple loosestrife is difficult to completely eradicate with one treatment and continues to spring up.

In 2019 the majority of the plants were found along Hoiles Drive on Skegemog Lake and within the South Skegemog Natural Area.   Some of this area was treated in 2018, but it is difficult to know what is new growth and what is returning growth because it is in hard to reach areas.

There were several large areas on Elk Lake treated in 2018, where property owners indicated it was 90% effective (Innis Lane, E. Elk Lake Rd).   There are some areas where purple loosestrife was not noted in 2017, but was visible this in 2019 (i.e.:  Palaestrum Cove, among others).

PLM has indicated that it often takes multiple years of treatment to effectively minimize the spread of purple loosestrife, so ESLA would like to continue treatments in 2020 and beyond if necessary.   ESLA shared our 2019 survey results with CAKE CISMA – the map above visually shows the locations of purple loosestrife in 2019.   CAKE CISMA applied for and received a grant from the Dole Family Foundation to treat purple loosestrife in the summer of 2020 in the Elk River Chain of Lakes at no cost to the Riparian / Lake Associations.   However, they may be unable to treat the areas of Elk Lake in Grand Traverse County (CAKE is Charlevoix, Antrim, Kalkaska and Emmet counties).    We are exploring the cost for ESLA to have those areas treated in 2020 or to wait until 2021.