Everything You Need To Know

We are grateful for these beautiful creatures that call our area’s lakes home. The health of our aquatic systems is often measured by the life it supports. Below are some facts about Loons to help better understand this unique creature to our ecosystem. 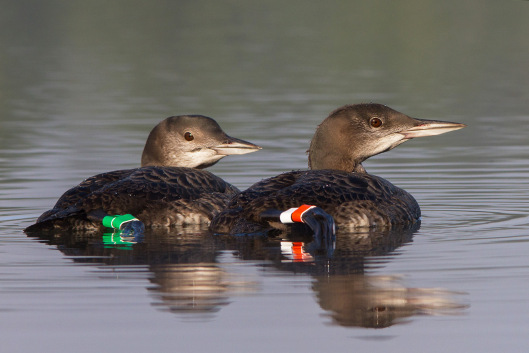 With over 3000 miles of shoreline and an abundance of 11,000 inland lakes, water is a way of life in Michigan. It supports our livelihoods, provides recreation, and defines character. Living in close proximity to water we also understand its vulnerability. Invasive species, development, and pollution all threaten the integrity of our water resources.

The health of our aquatic systems is often measured by the life it supports. The Common Loon, an iconic symbol of wilderness that inspires admiration among naturalists and artists alike, is a sentinel of environmental health. In Michigan, the loon is designated Threatened with fewer than 800 breeding pairs remaining. The factors that challenge the future survival of this revered species are the same that threaten the integrity of our lakes. Fortunately, concerned citizens and scientists have worked diligently over the past two decades to stabilize loon populations for which their efforts appear to be working. Loons respond to conservation. Shoreline protection, pollution reduction, and public education all play a part in maintaining, and in many instances enhancing loon populations in Michigan.

Unfortunately, not all threats have solutions. Driven by the proliferation of invasive species the reemergence of botulism on the Great Lakes has now killed over 15,000 loons during the past 10 years. Now we are witnessing the Gulf oil spill unfold as an unprecedented catastrophe that casts an uncertain light on the future of Michigan loons. In the fall, the entire breeding population of loons will return to the ocean. We know from banding recoveries that Michigan loons utilize both the Gulf and the Atlantic Coasts, however the proportion of those wintering on each is yet unknown. This critical question needs to be addressed to understand the implications of this unprecedented event upon our population of breeding loons.

Over the past 20 years, monitoring by Common Coast Research & Conservation indicates that adult loons exhibit very high annual survival rates of over 95%. As a means of comprehending the emerging threat to loons we propose additional banding in Michigan and subsequent monitoring to determine if survival rates decrease. In addition, new technology such as miniature archival tags are now available to track loons when they are away from their breeding lakes recording precisely where they migrate and spend the winter. Understanding the consequences of the Gulf oil spill on loons will prove critical to all future conservation efforts in Michigan. Please support this research to protect loons and assure they remain a welcomed presence on our
northern lakes.

A “Loon Scout” observes loons throughout the year and records these observations until the loons migrate in the fall. Then the “Loon Scout” completes a short report and sends it to the Michigan Loon Preservation Association (MLPA).

Loon Scouts will be observing loons on Elk Lake and Skegemog Lake from April 1- July 1, 2011. They will help the Elk River Chain Of Lakes (ERCOL) Loon Network gather information on the loons living on these two lakes. We need to determine the numbers of loons on each lake, the territory for each nesting pair and nest locations. We will use this information to determine the next steps to protect the loons.

Loon Scouts will be given instructions on observing loons and recording their sightings. Loon Scouts will send observations to Thom Yocum, ESLA Team Leader for the ERCOL Loon Network. 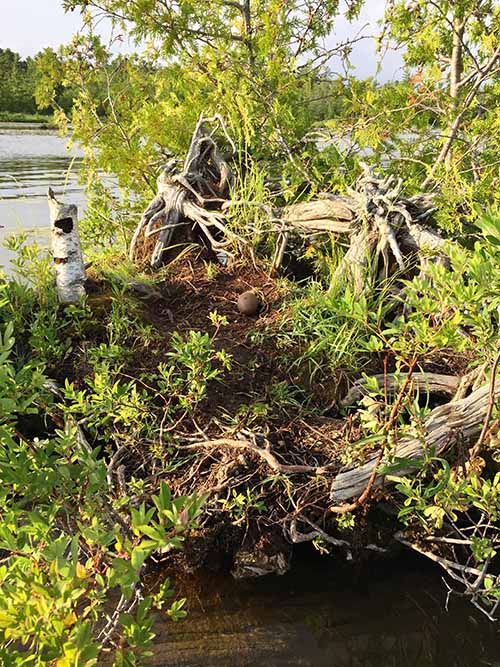 For the first time in a number of years – since 2011, to my knowledge – the Common Loon pair that nests in the undeveloped southeast end of Lake Skegemog have successfully hatched a chick. It is less than a week old, with a color-marked father who was captured and banded on Skegemog seven years ago. Although the family will likely roam widely around the southern half of the lake in the coming weeks, yesterday they were about a quarter mile offshore from the end of Hoiles Drive.

Elsewhere on Skegemog, the lake’s other territorial pair nested on a small island in the river mouth area near the north-shore wildlife viewing platform. Unfortunately, their single egg was infertile, and the pair eventually abandoned their attempt after incubating a week or so beyond the normal 28-day period. Attached is a picture of this nest and its egg, which was collected for contaminants testing and genetic work.

On Elk, the lake’s two territorial pairs – in the Elk River and in Kewadin – both successfully utilized artificial nesting platforms to hatch two chicks in early June. The Elk River family has moved into the main body of the lake and has primarily been found near the west shoreline to the south of Spencer Bay. The Kewadin family has mainly been lingering in the western cove to the south of Wandawood Resort. Three of the four Elk parents are also color-marked with bands on their legs.

Lastly, the territorial pair that occupies the Torch River undertook two unsuccessful nesting attempts this season. This first occurred on a small hummock in the middle of the channel at the mouth of the Rapid River. This was an extremely unfortunate choice of location, and the effort failed almost immediately due to the heavy recreational traffic of Memorial weekend. A second attempt was made on a nesting platform in the Bayou; this lasted several weeks before being abandoned in response to disturbance from multiple kayakers on July 4th. Both Torch River adults are also color-marked.

While loon parents with chicks are sometimes tolerant of slow boat/kayak approach, their tremolo call – often described as loon laughter – is a clear signal that one is getting too close.

I’ll be presenting at ESLA’s “It’s A Shore Thing” series on July 27th at 5:30 pm at the Twisted Fish Gallery. 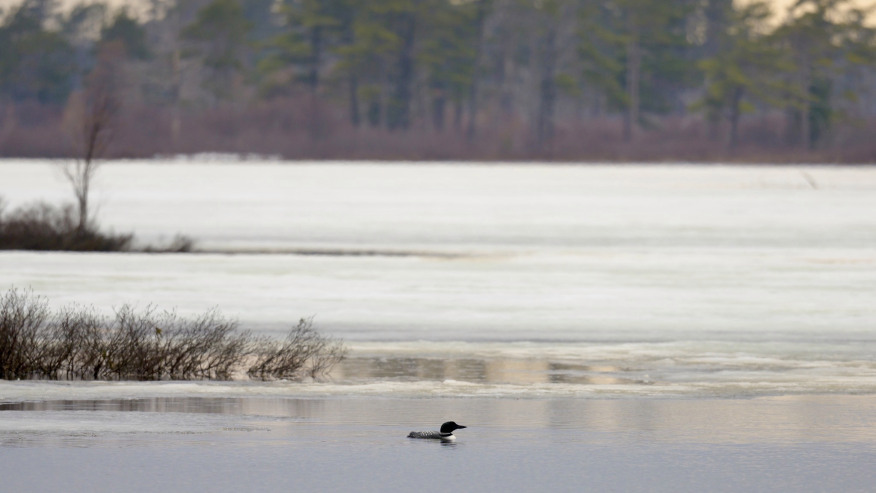 The ABJ was banded as a young refuge chick in 1987 and in June he will turn 33-years-old. His female mate, Fe, was first color-marked in 1990, this makes her at least 34-years-old and also the oldest known loon.

Over the past 23 years, the two lovebirds have produced offspring at a “much higher rate than their refuge counterparts.” McCormick said loons do not mate for life, and prior to coupling the ABJ and Fe together, Fe was actually coupled to a different male for at least seven years.

Fe is also known to be a “successful Seney mother”, as she is the most productive loon, with at least 33 chicks who have successful left fledged from Seney.

“In the coming weeks, the venerable F Pool pair will vigorously defend their territory from other adult loons in search of their own breeding turf and mate. If successful in parrying these challenges, the ABJ and Fe will settle in for a record 24th consecutive season of nesting at Seney, with one or two chicks hopefully hatching in June or early July,” said McCormick.

So there you have it, folks. Two of the world’s oldest loons and longtime mates have returned to their home, marking another season of love for the ABJ and Fe.

“The Call of the Loon”

From the Elk Rapids News (May 05, 2011) by Teresa O’Hara, Contributing Writer

The loons’ distinctive call is heard around lakes across northern Michigan during the summer months. The Elk Skegemog Lakes Association, in conjunction with the Chain of Lakes LOON NETWORK held a well attended meeting on Tuesday, April 26th in Elk Rapids. The two groups met to discuss the lack of loon nesting on both lakes. Serious loon enthusiasts braved the stormy weather that evening to attend and Thom Yocum, Environmental Protector Director of the Elk Skegemog Lakes Association and Audubon member, declared, “the loons are back and this is loon weather.”

Peg Comfort, LOON NETWORK Project Coordinator, said the purpose of the meeting is intended to “strengthen advocacy efforts for people who care about loons.” Loons are born here in northern Michigan but then travel south for the winter. Peg says essentially “loons are ocean birds that come north to reproduce.” You can identify loons from other similar species, such as Mergansers, by the fact that loons float deeper in the water than most water fowl. Loons have a long black beak that tapers off, a white chest and they will dive, not fly, when you approach them.

The LOON NETWORK is studying nesting problems on Elk Lake and Lake Skegemog and needs area volunteers to help in the research. Nesting sites are important to the reproduction of the loon. Although they prefer island nesting, they have some success with shoreline nests, utilizing muskrat lodges, and artificially created nests. Loons don’t actually build a nest like most birds. Their method is to form a depression out of gravel and twigs they scrape together, amongst a few reeds. LOON NETWORK has a number of opportunities for loon lovers in northern Michigan to help ensure successful nesting. Loon Scouts and Rangers are trained to observe and report on nesting spots and where the territories are. Scouts are basically observers while Rangers take a more proactive role by observing nesting sites, placing and maintaining artificial nests and dealing with distressed or harassed birds. Nesting is a tricky business and loons don’t readily take to a nest. Linda O’Meara, former Michigan Loon Preservation Association board member and Loon Ranger Coordinator for Lake Bellaire, was in attendance to relate her insights and exclaimed nesting is a lot of “trial and error.” Nesting sites, chicks and adult loons face a number of predators, including humans, snapping turtles and large fish. Loons are pretty fussy, if their nesting site is approached or disturbed, they may abandon the site, resulting in lower population numbers. Ms. O’Meara stated that loons are “a threatened species, protected by State and Federal laws.”

This year’s goal of the LOON NETWORK on Elk Lake and Lake Skegemog, is to find out why there has been no successful nesting on the lakes by locating nesting territories and how many loon pairs exist to get a better idea of their natural nesting locations. The network is also active in research involving banded loons. It’s their hope that more homeowners along the shores of Elk and Skegemog will participate either as an observing Scout or Ranger. Through research and observation, they’ve found that these two lakes have the lowest nesting success in the area. The network uses simple forms that make it easy for loon lovers to record their observations.

The LOON NETWORK is holding a musical benefit on Saturday, June 25th at the Old Town Hall in Elk Rapids. Tickets will be available in advance at a number of locations in Elk Rapids, Alden and Bellaire. Proceeds for the event will go toward educational signs, plus support research. For more information about the event or to volunteer, contact Peg Comfort at (231)676-0566.